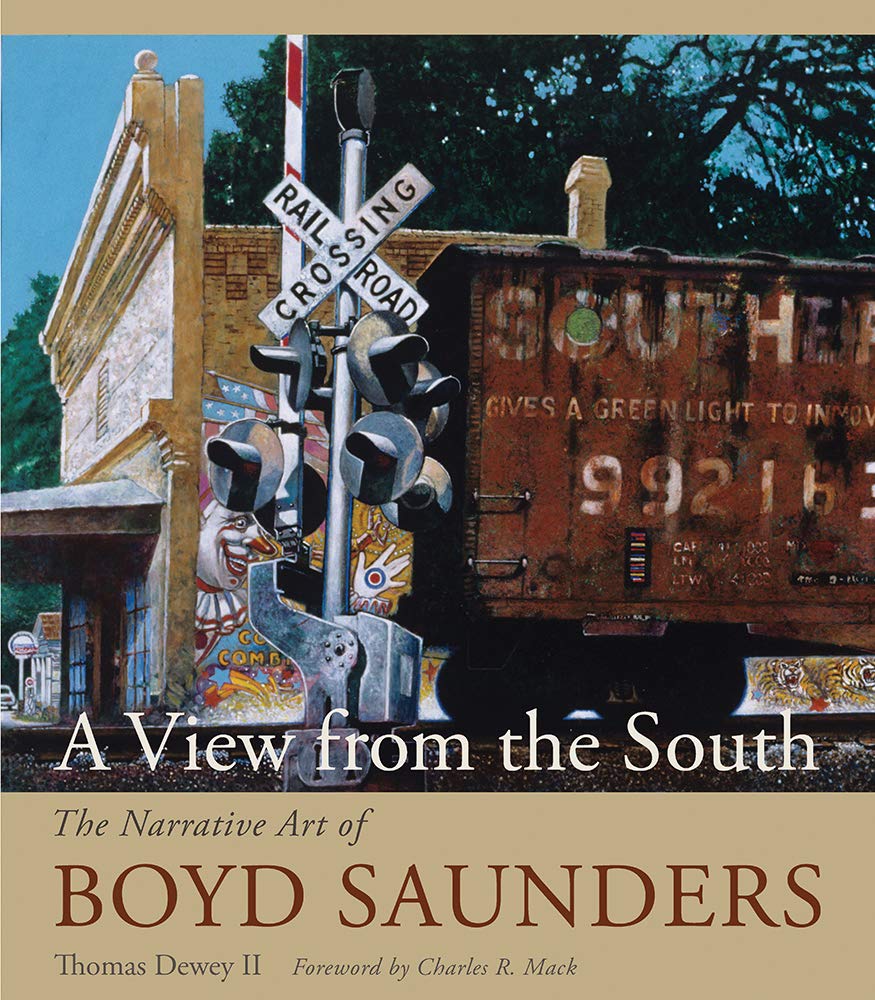 A View from the South: The Narrative Art of Boyd Saunders is the first comprehensive examination of the life and art of one of America’s premier printmakers. In this celebration of an enduring and widely acclaimed career as an artist, Thomas Dewey II chronicles Saunders’s work not only as a printmaker, but also as a painter, sculptor, illustrator, author, educator, amateur musician, and sometimes horseman. With great care Dewey exposes the common thread that runs through Saunders’s visual expressions: his intriguing tales that reveal his heartfelt devotion to the people and places of the American South.

Dewey has captured Saunders’s life story through intensive research as well as via a series of interviews with the artist over several years. Details of Saunders’s early life on a West Tennessee farm and his family’s long attachment to the land document a profound influence on his life, outlook, and art. But Saunders was also moved by literature―namely that of William Faulkner, whom he met while earning a master’s of fine art at the University of Mississippi. Saunders credits Faulkner with inspiring much of his work, demonstrated in his Spotted Horses, a limited volume of lithographs illustrating Faulkner’s short story of the same name, which was published by the University of South Carolina Press in 1989.

Now a distinguished professor emeritus of the University of South Carolina, Saunders founded its Art Department’s printmaking program as well as a southern printmaker’s organization called the Southern Graphics Council. In the more than forty years since its founding the organization, now called SGC International, it has grown well beyond its southern borders and now serves twenty-five hundred members worldwide.

A View from the South features more than 120 color images showcasing the themes, ideas, and techniques Saunders has used in his paintings, drawings, prints, sculptures, etchings, lithographs, and woodcuts. His art is exhibited throughout the world and is included in many private and public collections, including the Boston Public Library, the U.S. Wildlife Collection in Washington, D.C., and Shanxi University collection in China.
A foreword is provided by Charles R. Mack, professor emeritus of art history at the University of South Carolina.

“Boyd Saunders enjoys a well-told story―one populated with memorable characters in vivid settings all described in richly varied prose. And this is very much how he tells his visual stories. Saunders’ earthy and muscular lines clarify and enhance drama and remind us why a disciplined control of media―which he so clearly commands―remains important to the tale, however tall.”―Will South, chief curator, Columbia Museum of Art

“More than an academic monograph, Thomas Dewey’s A View from the South is a miscellany of delights, all ‘caught in the timeless magic of this place.’ Combining literary criticism, history, personal reminiscences and tall tales, at its heart are the haunting, enduring, and always beautiful images of Boyd Saunders’ art.”―Paul Ragan, author of Reflections on Faulkner’s The Sound and the Fury

“Boyd Saunders’s own ‘View of the South’ has been vividly projected, through his works and words, during a productive career as artist, printmaker, teacher, scholar, and raconteur. This book chronicles his contributions, with numerous illustrations of his art, and includes several of his memorable stories from his southern childhood.”―Ron Bridwell, appraiser of rare books and manuscripts

“this very fine volume serves as both a visual retrospective of the artist’s work and an entertaining commentary on the challenges faced by a pioneering Southern printmaker.”―Aiken Standard

“They don’t make them like Boyd Saunders anymore. The weight of his output and the undeniable power and richness in narrative arc of his career are in full measure in ‘A View from the South.'”―Jasper A Geek in Thailand: Discovering the Land of Golden Buddhas, Pad Thai and Kickboxing (Geek In…guides)