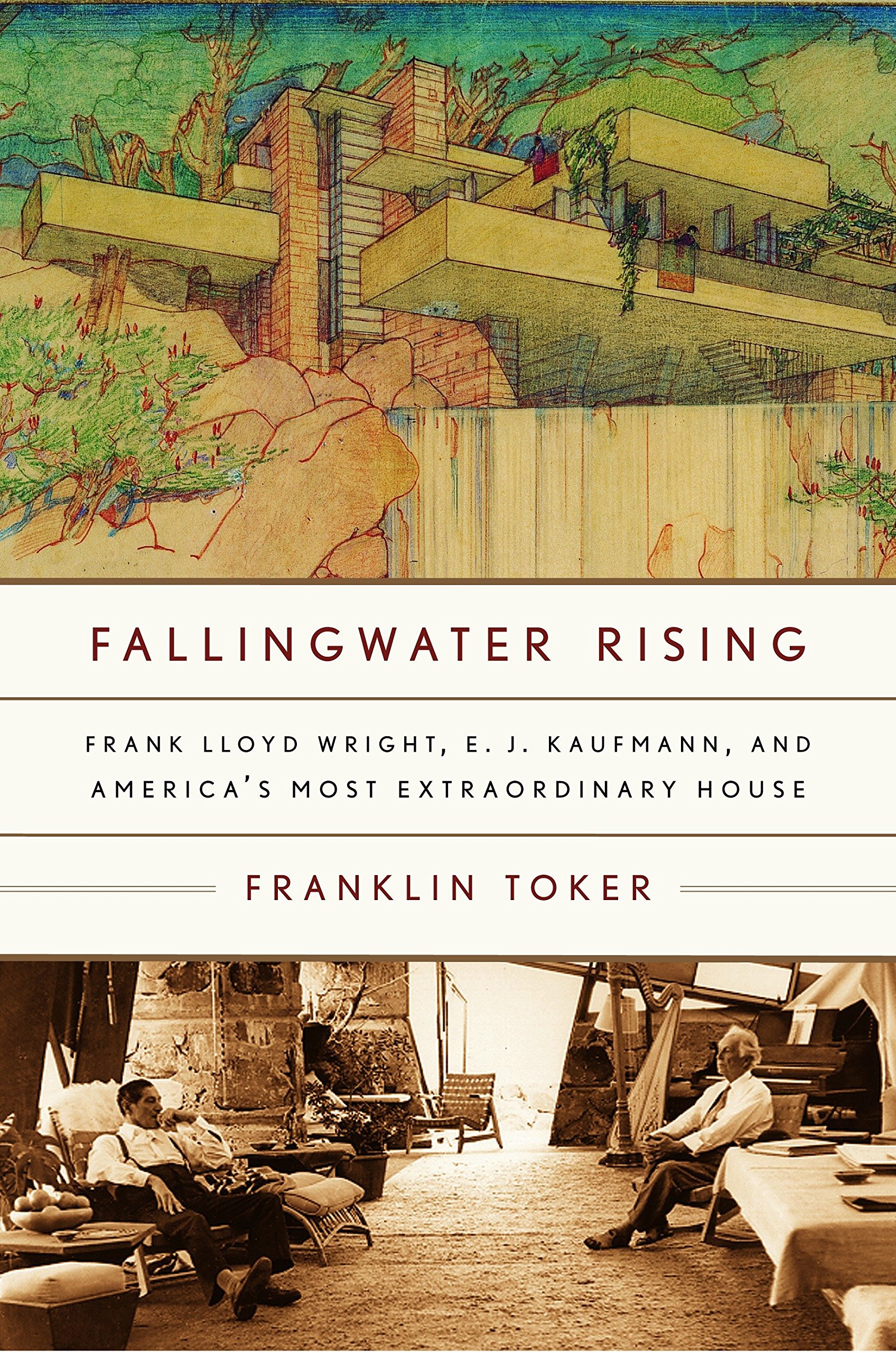 Fallingwater Rising is a biography not of a person but of the most famous house of the twentieth century. Scholars and the public have long extolled the house that Frank Lloyd Wright perched over a Pennsylvania waterfall in 1937, but the full story has never been told.

When he got the commission to design the house, Wright was nearing seventy, his youth and his early fame long gone. It was the Depression, and Wright had no work in sight. Into his orbit stepped Edgar J. Kaufmann, a Pittsburgh department-store mogul–“the smartest retailer in America”–and a philanthropist with the burning ambition to build a world-famous work of architecture. It was an unlikely collaboration: the Jewish merchant who had little concern for modern architecture and the brilliant modernist who was leery of Jews. But the two men collaborated to produce an extraordinary building of lasting architectural significance that brought international fame to them both and confirmed Wright’s position as the greatest architect of the twentieth century.

Fallingwater Rising is also an enthralling family drama, involving Kaufmann, his beautiful cousin/wife, Liliane, and their son, Edgar Jr., whose own role in the creation of Fallingwater and its ongoing reputation is central to the story. Involving such key figures of the l930s as Frida Kahlo, Albert Einstein, Henry R. Luce, William Randolph Hearst, Ayn Rand, and Franklin Roosevelt, Fallingwater Rising shows us how E. J. Kaufmann’s house became not just Wright’s masterpiece but a fundamental icon of American life.

One of the pleasures of the book is its rich evocation of the upper-crust society of Pittsburgh–Carnegie, Frick, the Mellons–a society that was socially reactionary but luxury-loving and baronial in its tastes, hobbies, and sexual attitudes (Kaufmann had so many mistresses that his store issued them distinctive charge plates they could use without paying).

Franklin Toker has been studying Fallingwater for eighteen years. No one but he could have given us this compelling saga of the most famous private house in the world and the dramatic personal story of the fascinating people who made and used it.

A major contribution to both architectural and social history.

“Utterly fascinating . . . An absolute page turner, thanks not only to Toker’s diligence, but also to his palpable excitement about his material . . . Nothing about the way Fallingwater was built, conceived, influenced or manipulated escapes the author’s attention. He brings the house to life on the page even as he analyzes its larger meaning.” —Janet Maslin, The New York Times

“Not merely does Toker tell what may well be as close to the truth as we’ll ever get about the building and boosting of this singular masterpiece; he also provides something of a synthesis of existing scholarship and journalism as well as a fascinating analysis of the relationship between architect and client.” —Jonathan Yardley, Washington Post Book World

“Toker imbeds the house in a dense matrix of social history . . . [Toker has an] insatiable thirst for every drop of the Fallingwater story . . . A major work of scholarship presented in a popular format [that] enabled Toker to give free rein to his wide-ranging knowledge of history, literature, popular culture, music, and, of course the medieval and Renaissance art and architecture of which he is a distinguished authority . . . No fact is omitted, no lead is left untaken, and every lead connects, or is made to connect, with the central story.” —Jack Quinan, Journal of the Society of Architectural Historians

“Keeps the reader engrossed and wondering what will happen next.” —Anthony Day, Los Angeles Times

“In Toker’s hands, Fallingwater is both fine architecture and the house that gave modernism an American face; its biography is an epic story . . . Immersing himself in his subject for nearly two decades, Toker has covered every corner and then some . . . His passion ensures that the narrative stays alive . . . The pages fly by.” —Matthew Flamm, Newsday

“A must read for Wright fans, it will also intrigue architecture buffs.” —Keir Graff, Booklist

“A fascinating portrait of the converging American dreams of Frank Lloyd Wright and the Kaufmann family set against the backdrop of the Great Depression. The book demonstrates how the story of one house can reveal a great deal about American identity and the forces that continue to shape it. It is an important work of scholarship yet it reads like a novel.” —Brent D. Glass, Director, Smithsonian National Museum of American History

“Smart, well-researched . . . dispelling myths and miracles along the way . . . Toker also throws light on Fallingwater’s poetic identity, and gets at why the house strikes a universal chord . . . Insightful, fascinating.” —Jeffrey Hildner, The Christian Science Monitor

“If for no other reason, Frank Lloyd Wright would be justly famous for Fallingwater, one of the most extraordinary houses in the world. This biography of a house is also a celebration of the creative minds who envisioned it and provides all the reasons, if any are needed, why Fallingwater should be cherished as a national monument. Franklin Toker has performed an invaluable service.” —Meryle Secrest, author of Frank Lloyd Wright

“A compelling narrative . . . Revealing and thoroughly documented stories all! . . . We are fortunate to have this book which tells an astonishing story, as it is unlikely that such a revolutionary work of art will appear again.” —William Tracy, Larry Woodin, and Deborah Vick, Frank Lloyd Wright Conservancy Bulletin

“A readable, lively history of this unique building, and how it came into being.” —Nicholas Basbanes, Orlando Sentinel

“Wright’s Fallingwater house made America fall in love with modernist architecture, according to this engrossing study . . . The trenchant analysis of Wright’s character and creativity, the often lyrical evocations of his buildings, and the opinionated but insightful overview of the modernist intellectual milieu of the 1930s make the book a wonderful exploration of the psychological and social meaning of architecture.” —Publishers Weekly

“A juicy story . . . Fallingwater is controversial even today, and the story of how it came to be is enthralling.” —Arizona Republic

“A cerebral, spiritual, and social pilgrimage through Fallingwater and the long shadows cast by the two personalities who brought the great home to fruition . . . with profiles that make Wright and Kaufmann human . . . Fallingwater, too, becomes a living thing through Toker’s intimate wording: a wondrous creature, exquisitely tuned to the site . . . Digging into personal and architectural history, Toker demonstrates spadework of the highest, most exacting, and refined order.” —Kirkus Reviews (starred review)

“Art historian Franklin Toker has peppered his recent study of the 20th century’s most famous house with a delicious supply of tidbits.” —Harry Schwalb, ARTnews

“For anyone interested in architecture . . . this book is a must.” —Matthew Kangas, Seattle Times

“This architectural biography of a house is the best and most comprehensive yet on the structure and its creators.” —Donald Miller, Pittsburgh Post-Gazette

“What is remarkable and compelling about Franklin Toker’s new book Fallingwater Rising is that, although a scrupulously researched work of nonfiction, it is vibrantly alive, full of intrigue and populated with individuals of genuine dramatic interest . . . For readers who have already experienced Fallingwater, this book will be the key that will open its many mysteries and architectural miracles.” —Nagle Jackson, Trenton Times

“The most comprehensive book available about Frank Lloyd Wright’s most notable house . . . While there are prized pieces of new information in nearly every chapter of this book, Toker’s investigation into the publicity and hype surrounding Fallingwater makes for some of the more fascinating reading here.” —Library Journal (starred review) The Strange Gospel: Narrative Design and Point of View in John (Biblical Interpretation)