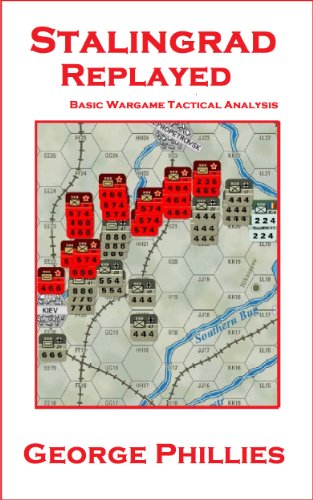 Stalingrad, the 1963 game from Avalon Hill, is the most intensely analyzed board wargame in the history of the wargaming hobby. Stalingrad Replayed presents a series of complete games, with detailed turn-by-turn tactical analysis by Grandmaster George Phillies. Stalingrad Replayed is a worthy successor to his earlier volume Stalingrad for Beginners, which presents the game rules and some elementary principles of tactical analysis.

George Phillies is a recognized grand master of the play of Stalingrad. For almost a half century, his articles on game play, game tactics, and game strategy have been eagerly sought out by Stalingrad players around the world. His treatment "Stalingrad, the Middle Game", is widely recognized as the best single article ever written on the game.

For game designers, Stalingrad Replayed has a different purpose. The author’s theme is that games are subject to deep tactical analysis, if the players know exactly what the rules are. Full knowledge of the rules is the opposite of the situation in some computer games, in which players are left ignorant of the rules, so that game responses to player actions can be mysterious, frustrating, or pointless. Stalingrad Replayed is a presentation by example of the virtue of transparent game design, in which the full rules are known to the players.

George Phillies is a Professor in the Worcester Polytechnic Institute interdisciplinary program in Interactive Media and Game Development. Video Game Design Notebook: A Write-In Planner for Your Next Console or Computer-Based Video Game Pinkalicious: The Pinkerrific Playdate (I Can Read Level 1)